American chemist Westheimer asked an interesting question in 1987 in his very famous article published in ‘Science’ the same year, ‘why nature chose phosphates?’. He elegantly approached this problem from a chemists’ perspective. Phosphorus, a group 15 element, is an essential element of biomolecules. Phosphorus and its chemistry pervade cells and living systems, ATP, the ubiquitous currency of energy, is a nucleotide with two phosphates available in high energy phospho anhydride bonds. The backbone of genetic material (DNA or RNA) is made up of phosphates, two adjacent nucleotides are linked by phosphodiester bonds. The negative charge present on phosphodiester linkages in nucleic acids makes them resistant to hydrolysis and therefore very stable in aqueous environments, a key feature required for a molecule to qualify as a genetic material is chemical stability. Other group 15 elements like arsenic don’t make esters that are stable in aqueous conditions at neutral pH.

One of the immediate and most obvious outcomes of phosphorylating a molecule is to impart negative charge to the molecule. Since phosphate occurs as a di-anionic moiety at cellular pH, charge imparted by phosphate group can bring about a change in conformation of the proteins by allosteric effects, it can also change the isoelectric point of proteins. In fact, phosphorylation can reduce net positive charge on a given molecule, which as we will explore further, can have interesting consequences for protein-lipid membrane or protein-protein interactions.

A large number of metabolites are rendered charged by phosphorylation and this occurs primarily to prevent diffusion of these molecules across plasma membrane. A charged molecule cannot leave plasma-membrane and remains inside the cell. Moreover, negative charge greatly diminishes the attack by nucleophiles. 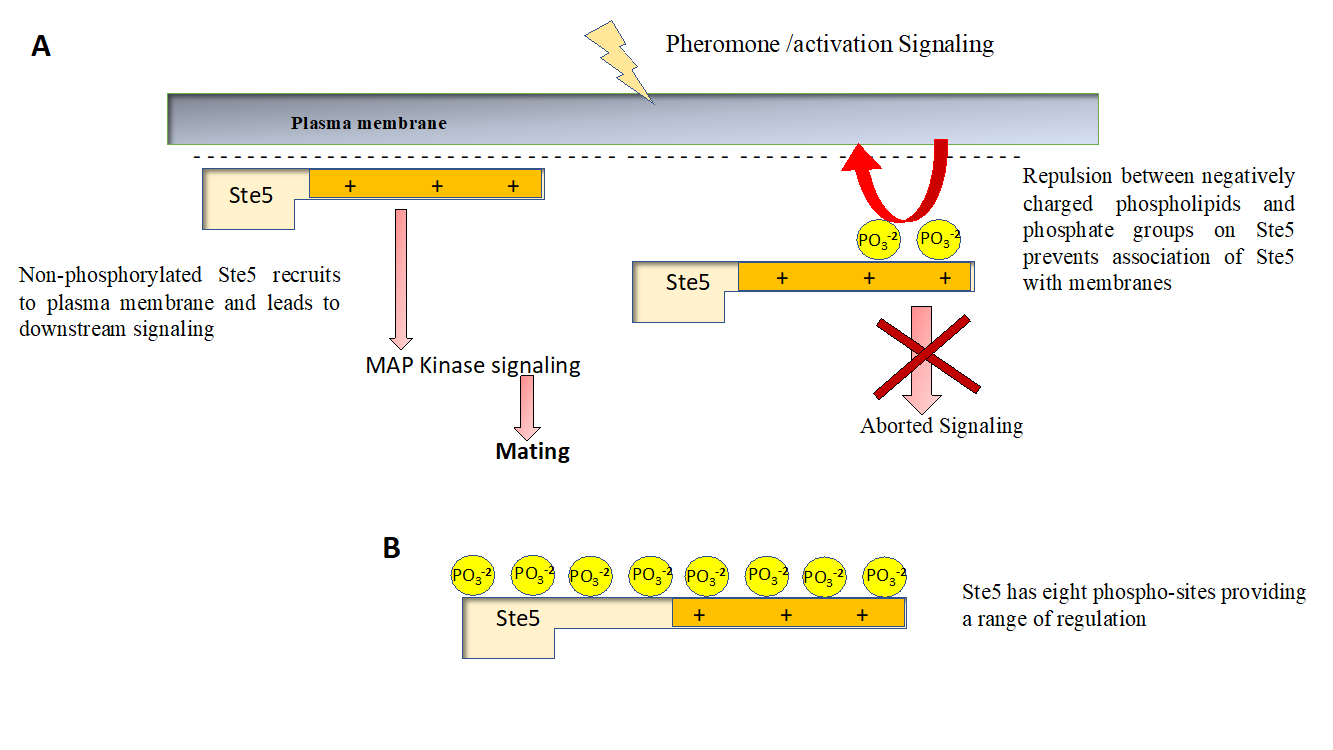 Figure 2 Regulation of signaling by protein phosphorylation (A) Ste5 is a well-studied signaling molecule that plays a critical role in relaying signal from pheromone to stimulate budding in yeast. Membrane recruitment of Ste5 is critical for its role as a signaling molecule, Phosphorylation of Ste5 prevents its membrane recruitment as it leads to a net negative charge on otherwise basic protein. Failure of Ste5 to recruit membrane impair it’s signaling function and mating doesn’t happen. (B) Ste5 has a basic motif (positively charged) that interacts with negatively charged phospholipids of the plasma membrane and also interacts with GPCR subunits (not shown for sake of simplicity). Ste5 has eight phosphorylation sites, allowing a graded response (and hence fine regulation) of its membrane residence time and hence signaling function, decreasing with each additional phosphorylation event.

The effect of phosphorylation on proteins vary dramatically, for example in case of Glycogen phosphorylase, the effect of phosphorylation is not additive (and also not inhibitory) unlike Ste5, but phosphorylation of a key serine residue in this enzyme leads to a dramatic change in protein conformation due to allosteric effects, leading to tetramerization of protein and activation of catalysis. Phosphorylation of certain proteins don’t cause any change in conformation but create sites for docking of other molecules such as binding of SH2 domain containing proteins on phosphorylated tails of cytokine receptors on cell surface or binding of 14-3-3 proteins to poly phosphoserine residues. Phosphorylation can influence protein function in many ways (highly context specific) and is by and large most pervasive post-translational modification and perhaps nature’s favorite way of decorating proteins.