What are Paradigms of regulation for kinases and phosphatases?

Cells maintain a basal kinase and phosphatase activity and chemical inhibition of either activity leads to dysregulation of protein function in cells, for example suppression of basal phosphatase activity in cells can amplify the basal phosphorylation events and can result in unwanted outcomes for the cells such as changes in cellular morphology or physiology or both, stress response activation and cell death and similarly inhibition of kinase activity would tip off the balance in the favor of abundance of dephosphorylated proteins. Apart from basal activity, activity of kinases and phosphatases are inducible in highly specific manner. The signaling pathways in cells are wired around kinases and phosphatases and therefore inducible activation of their activities is a major theme in signaling biology.

In some of the pathways, the cell surface receptor itself possesses intrinsic kinase or phosphatase activities in its cytoplasmic domain, whereas in many others the activated receptor interacts with kinase or phosphatase molecules upon stimulation. It is often perceived that kinases are always activator and phosphatases are always the desensitizers (inhibitory) in their mode of action, but that may not always be the case. For example, CD45 has an intrinsic tyrosine phosphatase activity, it is now established as an essential component of the signalling machinery of lymphocytes, it plays a critical role in antigen-stimulated proliferation of T lymphocytes and during the course of thymic development.

Inside cells, kinases are wired into a hierarchy where kinases higher in hierarchy bring about activation of lower kinases and signal is thereby amplified at each step much like a cascade. Phosphatases usually don’t work that way, and therefore to maintain a balance, phosphatase activity is present in several fold excess of kinase activity, for example protein tyrosine phosphatase activities are in general two to four order magnitude higher than protein tyrosine kinase activities.

How do kinases maintain their specificity?

The inside of a cell is a highly crowded space with a myriad of molecules sloshing around. It is therefore critical for survival of cells that phosphorylation and dephosphorylation occurs at right place at the right time (See figure 2). Kinases exhibit exquisite specificity in terms of their substrate preferences. Serine, threonine and are phosphorylated by serine-threonine kinases and tyrosine residues are phosphorylated by tyrosine kinases. Kinases recognize their substrate proteins through two different mechanisms (1) proximal mode, where a kinase recognize a peptide sequence as a target, (2) Distal mode, a domain on substrate protein is recognized by a recognition/cognate domain on kinase molecules. Apart from these two modes of substrate identification, the kinases also ‘home-in’ on their substrate molecules by the help of adaptor proteins such as Beta-arrestins. 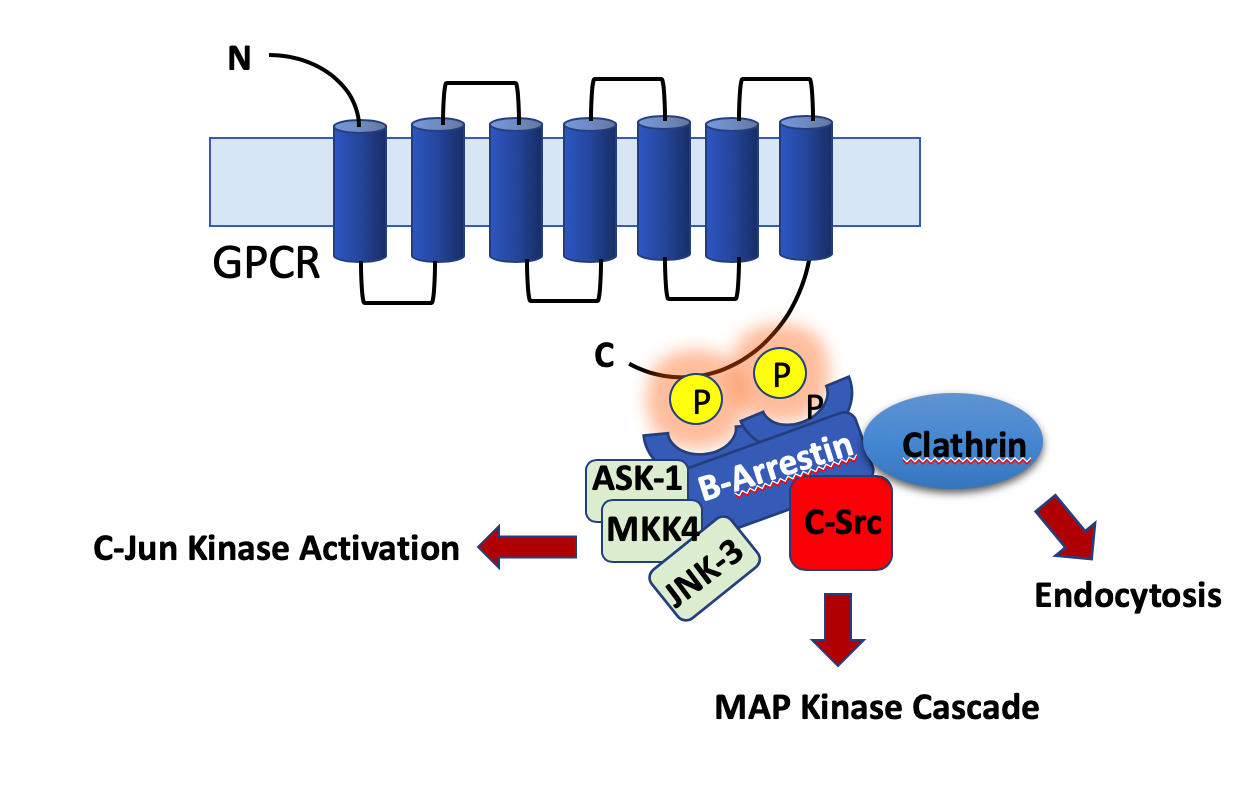 Figure 2. The Beta arrestins are adaptor proteins that bring about downstream signaling from GPCR proteins. They dock to phosphorylated cytoplasmic tail of GPCRs. The specificity of phosphorylation is critical since an aberrant phosphorylation can lead to aberrant activation of many signaling pathways.

Figure 3: The integration of kinase and phosphatase activity in cells can lead to a variety of signaling responses as described above (from left to right), Hyperbolic response, Ultrasensitive response, Bi-stable response.

And there comes into picture another kind of signaling response, this is ultrasensitive signaling response. Here the input leads to activation of kinases and at the same time indirect suppression of phosphatase activity, known as reciprocal signaling, this leads to ultrasensitive response. As one could infer from the nature of curve, the response is flat at lower and higher input strength but is extremely sensitive to small change in inputs within a range in-between and a maximum response is generated. A maximal phosphorylation response is generated for a range of input values. Such signaling modules regulates mitotic entry of cells. Kinases and phosphatases can interact in many other ways other than reciprocal signaling to generate ultrasensitive response modules. This response can be approximated by Hill’s equation.

Cells have yet another mode of generating a signaling response by ingenious integration of kinase and phosphatase activity known as bi-stable response. This is usually achieved by employing feedback loops, for example auto phosphorylation of kinase further boosts its activity and similarly if it decreases its own dephosphorylation in response to its activation. The outcome is a bi stable response where a wide range of input values have a robust output response to small changes in input, anything below threshold leads to a stable low phosphorylated state and anything that leads to crossing the threshold will have a stable maximum phosphorylated state and hence the bi-stable nature. The signal cannot be modulated for intermediate levels of phosphorylation response. Such circuitry is found at important decision-making points such as mitotic checkpoints.

Cells can constrain kinases and phosphatases to have their activity in a given subcellular compartment and at a given time point by controlling their spatial and temporal localizations in the cells. This is achieved by a variety of diverse mechanisms which is in itself deserve a separate blog article and would be discussed elsewhere in future.