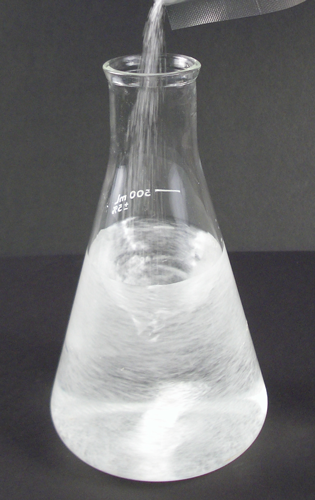 Salt precipitation can be a very powerful tool to purify proteins by precipitation. Ammonium sulfate is usually the salt of choice since it is cheap, very soluble in water, and is able to become much more hydrated (interacts with more water molecules) than almost any other ionic solvent. In practice, ammonium sulfate is either added directly as a solid or added as a (usually) saturated solution to precipitate desired proteins.

At low salt concentrations (<0.15M) the addition of more salt in general tends to increase the solubility of proteins as ions shield the protein molecules from the charges of other molecules; this trend is termed ‘salting-in’. At some point the ionic strength becomes too high and starts to have a negative effect on the solubility of proteins, termed ‘salting-out’. This happens because the dissolved salt competes with the proteins for scarce water molecules, increasing the surface tension of water and therefore causing the protein to fold tighter. The reduction in protein surface area means less protein-water interactions which allows for more hydrophobic interactions between protein molecules, causing aggregation and subsequently precipitation.

Proteins in solution can also be fractionated out since they will precipitate out as a function of salt concentration. In this way it is possible to purify specific proteins by adding a specific amount of ammonium sulfate to precipitate out non-desirable proteins, recovering the supernatant, and then adding a bit more ammonium sulfate to precipitate out the desired protein and then save that pellet of precipitated protein. Since salt precipitation only affects the solubility of proteins and does not denature them, the recovered fraction can be stored in the salt solution for prolonged periods of time without having to worry about bacterial contamination since the high salt content inhibits any microbial growth or protease activity.

There are some best practices that should be considered when working with ammonium sulfate such as:

The process of salt precipitation does come with some disadvantages. Salting out proteins requires prior knowledge of the protein’s solubility. In addition, any contaminants present in the initial sample may still be present in the fraction containing the protein of interest; this process concentrates the protein but does not purify it. Furthermore, it may be necessary to remove the salt from the protein sample and so further processing in the form of either dialysis or chromatography will be required.