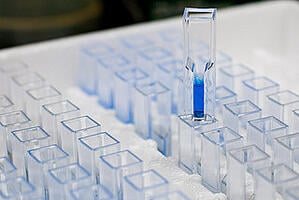 The Bradford assay is a fast and efficient colorimetric assay to determine the protein concentration in a wide range of solutions and is widely used for protein content of cell fractions and protein concentrations for gel electrophoresis. It is often done before an SDS-PAGE analysis. Using the reagent Coomassie Brilliant Blue G-250, the solution undergoes a visible change in color when the dye binds to proteins via van de Waals and electrostatic interactions, causing a shift from a dark red to a deep blue. This is a result of stabilization moving the absorbance maximum of the dye from 470 to 595 nm. Tested samples typically take less than five minutes to reach the indicative measures of 595 nm absorbance concentration, making the Bradford assay both reliable and quick.

The Bradford assay is appropriate for general use and is distinguished from many other assays for being less susceptible to interference by compounds such as sodium, potassium, and certain carbohydrates that exist in samples. One note to remember is that sodium dodecyl sulfate (SDS), while often used to extract proteins from cells, interferes with the assay, and thus should be handled carefully. When proteins that carry residue of SDS are used as samples in the Bradford assay, the Coomassie dye is either kept from binding due to the bondage of SDS to proteins, or the SDS associates with the green form of the dye, shifting the equilibrium and overrepresenting the absorption at 595 nm regardless of true protein concentration.

The exact protein concentration can be determined due to interpolation from a standard curve made by measuring the absorbance of a dilution series of proteins with known concentrations within the response range of the Bradford assay. Bovine serum albumin and bovine γ-globulin are both common standards used for this assay.

The Bradford assay is generally recommended for the following sample types:

Additional constraints of the Bradford assay include that it is incompatible with surfactants, proteins with poor acid solubility, and is highly sensitive to basic and aromatic amino acids such as arginine, histidine, and lysine. When completing this assay, you should also note to use cuvettes that are plastic and/or disposable, as glass and quartz cuvettes may be stained by the dye.

Rely on G-Biosciences for Your Bradford Assay Needs

At G-Biosciences, we offer a selection of supplies for your Bradford assay needs. Browse through our products and then contact us with any questions or to place an order.