What are Protease Inhibitors and How Do They Work?

What are Protease Inhibitors and How Do They Work?

The reason for this is simple. Most proteases that are found in most cells and tissues belong to the serine protease group (Chymotrypsin, Kallikrein, Plasmin, Proteinase K, Thrombin and Trypsin) and they need to be rendered ineffective to ensure satisfactory protein purification yields.

PMSF works by deactivating the serine hydroxyl group and any other enzyme that contains serine in its active site through an esterification process. However, if the biological activity of such an enzyme needs to be maintained, one should consider using other types of serine protease inhibitor such as AEBSF, Aprotinin or Benzamidine.

Metalloproteases, on the other hand, are best deactivated by using EDTA that chelates the metal ions required for metalloproteases activity.  Other classical lock and key inhibitors such as bestatin and other protein inhibitors such as alpha-2 macroglobulin can also be used. Other proteases may be of lesser significance but they should likewise be rendered ineffective if you want to get accurate results from your assay.

How do protease inhibitors work?

Protease inhibitors work by reversibly or irreversibly deactivating the protease present in the cell lysate by binding to the active site or by modifying its structure. Either of these actions will prevent the hydrolysis of the protein sample and allow you to store your lysate for a longer duration without being degraded in the process.

However, since there is not one chemical that can effectively deactivate each known protease, most researchers prefer to use ready-to-use "cocktails" or prepare their own mixture of several inhibitor compounds to stave off proteolysis and preserve protein extracts from degradation.

For a full range of G-Biosciences protease inhibitors and cocktails, download our Protease Inhibitor Handbook 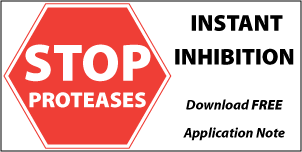