Since its inception forty years ago, Western blotting has been a mainstay technique for molecular biologists around the world to detect and quantify proteins. Western blotting is a simple technique that involves the transfer of proteins (blotting) from labile polyacrylamide gels to resilient materials such as nitrocellulose or PVDF membranes using electrophoresis. Western blotting combines the resolving ability of SDS-PAGE and specificity of antibodies to detect the proteins adsorbed on the membrane. The detection methods such as chromogenic reactions or chemiluminescence allow detection and quantification of proteins. These methods are highly successful for routine applications in the lab but suffer from certain limitations also. For example, chemiluminescence is short-lived and requires quick processing of samples to obtain the best results.

Another major shortcoming of existing methods is that it does not allow one to detect multiple proteins on the same blot at the same time. To detect different proteins on a blot, the membrane should be stripped and reprobed with different antibodies one by one. Sometimes more than one blot may be required to detect all the proteins under consideration, this becomes problematic when samples are limited. Moreover, stripping and reprobing can compromise the integrity of nitrocellulose membranes and can lead to the loss of adsorbed proteins, this can lead to serious errors in the quantification of proteins. 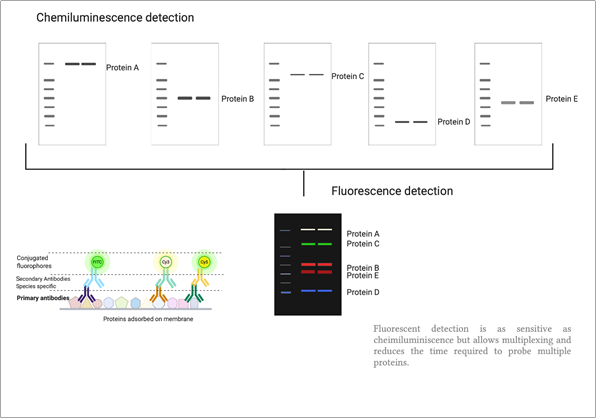 A major advancement in western blotting is the application of fluorescence in western blotting, this allows quantification of multiple target proteins in a single shot on a single blot. This also allows simplification of data analysis, because one can compare signals from different target protein bands as they all are on the same blot and therefore have been exposed to identical conditions of electrophoresis and transfer. Moreover, fluorescence is extremely sensitive and directly quantifiable as compared to chromogenic and chemiluminescence detection methods.

There are certain important considerations to keep in mind as you switch to fluorescence Western blotting, they are mentioned below, 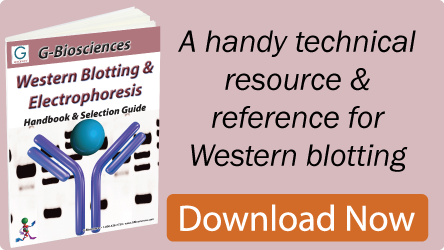