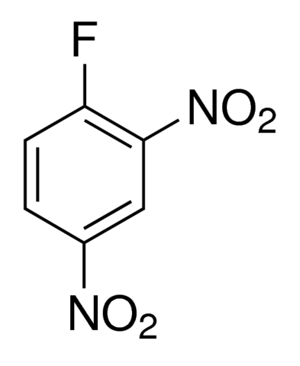 DNFB also alters enzyme activity of some proteins. DNFB strongly inhibits the reductase activity of mitochondrial cytochrome b-c1 complex. Addition of DNFB modifies amino groups and basic nucleophilic groups in amino acid residues, resulting in a decrease of both electron transfer and proton translocation in the b-c1 complex. Catalytic properties of Fructose 1,6-diphosphatase are changed by adding DNFB at neutral pH compared to that at high pH. DNFB can also be used to distinguish reduced and oxidised forms of glutathione and cysteine in biological systems especially blood, cell lysates.

Detection of N-terminal Amino acid of Proteins or Peptides:

The N terminal amino acid of the protein is labeled by Sanger’s reagent. DNP derivatives are stable to acid hydrolysis. The labeled protein is then hydrolyzed and loaded on chromatography column and the elution profile is matched with the standard profile obtained from FNB derivative of all the amino acids. The reagents produce colored derivatives which can be easily detected by absorbance. Detection of N-terminal amino acid of Insulin is mentioned below, this method can be applied to any protein (best works with less than 50-70 amino acids.) For larger proteins, before DNFB treatment, the protein should be hydrolysed to small fragments by trypsin or pepsin or by chemicals like cyanogen bromide.

Pontremoli et al reported that 4 eq of DNFB per mole of the enzyme increases the catalytic activity of Fructose 1,6-diphosphatase by 3-4 times. Dinitrophenylated enzyme shows a change in optimum pH from 9.4 to 7.5. Also, the addition of DNFB results in a significant increase in Michaelis Constant for both substrates and metal ion activator. It is suggested that DNFB alters the allosteric site of the enzyme, thereby induces a change in protein conformation resulting in a change in activity.